Willowood Films is a Toronto, Canada based company founded in 2010 by Producer Chris Luckhardt. The company provides production services for corporate and non-profitable organizations. We will be expanding our services to music videos, tv series, short films and feature film production in 2011.

We strive to produce high quality independent films that will generate attention from film festivals and international audiences. Our films express our observations of the current global culture and how it affects human behaviour.

We believe that the ingredients necessary to make highly interesting films are great scripts, impeccable acting and the perfect execution of our artistic vision. Striving to achieve our goals, our productions are streamlined and efficient. We excel in finding creative ways to get the results that we want without overspending and overshooting.

Our films are made possible through collaborations with both established and emerging filmmakers. Our post-production facilities have been generously donated by Toronto’s top-tier post-production companies. It is these companies that support us and enable us to continue to grow as independent filmmakers.

We are always welcoming fellow filmmakers, actors, writers, technicians and creative people of all kinds to collaborate with us in making meaningful, entertaining films. We believe that only with a group of highly-talented people working together can achieve our goals of making the important films of the future.

For information on booking our services for corporate or non-profit productions, please email info@willowoodfilms.com 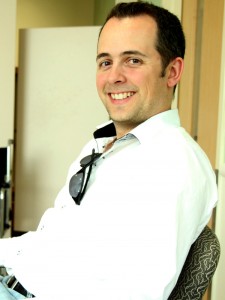 Chris Luckhardt was born on February 20, 1978 in Chatham, Ontario at St. Joseph Hospital. Oldest son of Laurie and Linda Luckhardt, he has one younger sister, Amanda, and one younger brother, Jason. His ethnic background is German, British, Scottish and Irish; both parents were born in Canada, family originated from Germany and England.

Chris is an established Toronto based film and television producer. With a physics and astronomy degree from York University, he has managed to excel in both television and film market as a producer and production manager. He produced the hit Canadian superhero TV series Team Epic which aired on BiteTV. More recently, he was the APM for the first season of CityTV reality TV show Meet the Family.

With the success on producing the award winning short films Altarcations and Shaky Grounds, he established Willowood Films to further develop ideas and scripts into TV series, short films and feature films.

In the past several years, he has produced the following short films: The Last Mermaids, Love Is, What Have We Done, For Now and Forever, Look Up, Bela (Bravofact), Siren (Bravofact) and feature film Tru Love. Tru Love screened at 50 film festivals worldwide and received 15 awards, including best picture and best actress. Also during that time period, Chris has also line produced/production managed two short films The Portal (Bravofact), Cold Feet (CFC) and four feature films Silent Retreat, Jackie Boy, Gridlocked and One Drop.

Chris graduated from Lester B. Pearson High School in 1997 with aspirations of being an astronaut. He soon realized that goal of space travel would not come to pass in the immediate or foreseeable future. Chris pursued other fields of interest from Web Designing, Marketing and Event Planning. Chris holds a Bachelor’s of Science degree in Physics and Astronomy from York University.

His first venture in film started with the creation of his own production company ‘Sprinkles and Cake Film Productions’ with fellow filmmaker Carla Susanto. They would go on to make several short films, all featuring in film festivals around the world. In 2008, Chris was hired at Poetic Licence Productions (PLP Media) as their Chief Technical Officer / Producer. Working with Montgomery Bjornson, they both developed and produced the hit Canadian superhero web series Team Epic, which was later picked up on television by Bite TV.

Chris has been able to use his diverse skill set in many positions ranging from producer, line producer, production manager, writer, assistant director, camera operator and more…